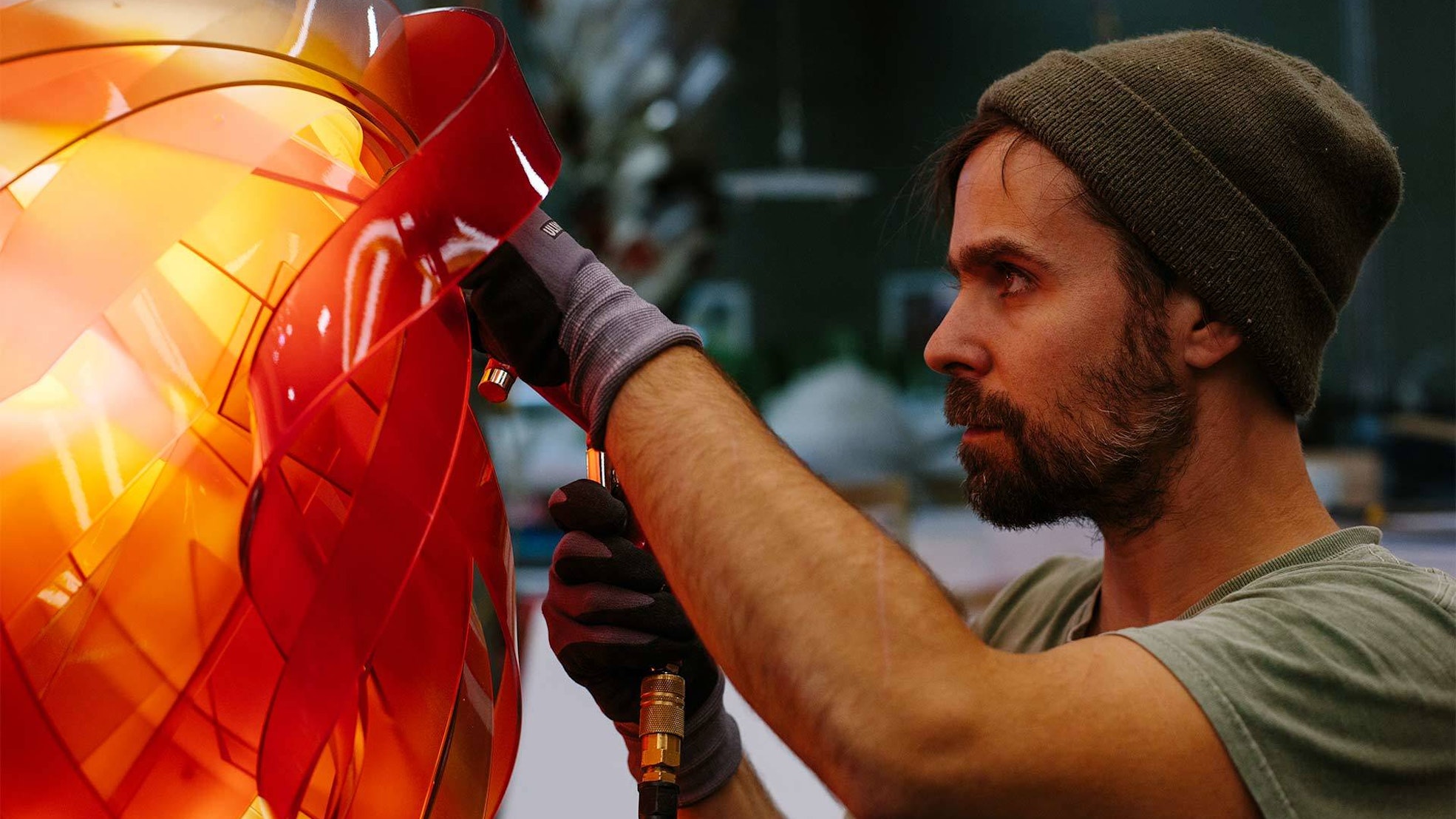 An integral part of LightArt's process are the Artisans, these team members work directly with 3form resins to build sculptural, organic and complex pieces. Over the years they've built dramatic dragons, waves of ribbons, and even flowers inspired by local botanical gardens. The Artisans create one-of-a-kind fixtures with their knowledge of materials, construction, and form.

the Artisan team is Nick VanStrander. Nick took some time out of his busy day to give us some insight into his background and his experiences at LightArt.

Can you tell us how you came to LightArt?

Before LightArt, I had been doing exhibit work at a non-profit children’s museum. It started off as very hands-on, working with the Executive Director, but it became more and more administrative. I wanted to get away from spreadsheets and get my hands back onto things, so I would start weaseling my way into the shop and phase the other part out. I really loved the place.

My girlfriend, now wife, saw the position for LightArt Artisan. I got in and eventually started working evenings with Ryan (Founder, President, and Creative Director of LightArt) until about 9pm. Ryan would be working even later. I did both jobs for about two weeks until I was full time at LightArt.

To go back further - I have a background in sculpture and set building. For a while, I was doing restorative sculpture work in New York City. All of the old building facades would have these deteriorating, decorative elements. Back in the day, these Old World sculptural masters would come over and have their designs cast in terracotta, which does not last long. I’d then make them pretty again, this time to be cast in reinforced concrete. There were these cherubs - I’d have to repair both sets of cheeks - along with corinthian capitals, egg and dart motifs, etcetera.

I eventually realized I might not actually be so much of a city person, so I moved out here, to the Pacific Northwest. I was living in a cabin on the beach, literally yards from the water. My girlfriend eventually joined me after I told her about the magical, near-constant rainbows and about having otters running around nearby. She came out to ‘test the waters’ and never left.

What does a typical day look like for you?

It’s a lot of sculpting our resin materials with heat and tools! Then, occasionally, being briefly interrupted to consult about fu

ture projects. I also spend a lot of time jamming to the overhead music with James (James Coury, fellow Artisan). There’s also a lot of tea and coffee drinking, and listening to podcasts all while making large one-of-a kind sculptures.

What interests/passions do you pursue outside of work?

I have a business with my wife where we teach cooking vegan food. Our approach is very non-judgmental; 50% of the people in the classes are actually omnivores. It’s helpful for people who are considering it - we want all to feel welcome and to show that vegans aren’t weird.

I was recently certified as a yoga instructor this past June, around my birthday! I enjoy kayaking and mountain exploring. In an alternate life I see myself as Grizzly Adams with Gentle Ben in the other seat of the kayak.

My pet ducks are also a big part of my life, but mostly in the summer when we’re on the same schedule. They’re very in tune with the seasons, kind of solar-powered. In the winter, I leave for work when it’s dark and get back home when it’s dark; so they kind of forget who I am. My cat, Baya, is also great - she’s old but still really energetic. Like an 85 year old lady, zip-lining everywhere.

What kind of art or aspects of design do you enjoy?

I’ve always liked the practical arts and performance art. I really like those trucks in Japan where they’re just decked out in lights - “Dekotora Trucks.” I like stuff that’s produced by regular people, “vernacular design,” as well as production design in film.

That’s another alternate life - production designer... or maybe a perfume designer. That composition process has to be so strange- so abstract and subtle. But I’m really more like an ogre; I need tools.

What fictional character would you like to switch places with for a week?

I’d like to be the whale from Moby-Dick! ...which I suppose would be Moby Dick. It’s a good book to revisit, especially in the autumn.

Or Zorba the Greek - a good springtime book. He’s just an old, blue-collar Greek dude. He’s optimistic; despite having been through some miserable experiences, he still appreciates the beauty in life. He’s a realistic but accessible character.

This place just has been a barrage of stories. I don’t know if there’s a single narrative that’s my favorite, but it’s really the atmosphere. It’s a kaleidoscope of different things.

the building on a skateboard to get parts from one bay to another. There also was a period of time when I used to sneak into the shop early and pose this Howdy Doody doll in different, bizarre ways to gaslight Bruce (Product Director). And going on installs is always fun as well.

I always like our big gatherings for different holidays, with the whole company sitting around the rainbow table and having a Thanksgiving meal.

Before this, I hadn’t really stayed at gigs very long, maybe two years. I’ve been here six years. As structured as this place is now, compared to the old days, there’s still a great, playful atmosphere.